In Okinawa, karate practitioners wore “Han Hakama” (short pants above the knees) until the beginning of the Showa Era, which began in 1926, for karate training. The top was usually bare. 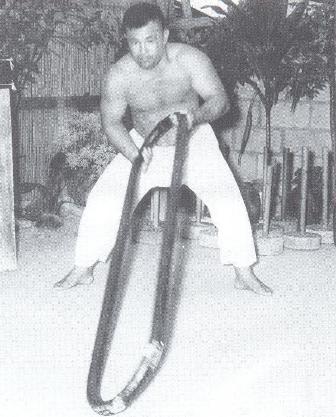 As Karate gradually spread to the other prefectures, Judo wear was copied until the use of present day Karate wear, which has become popular. Judo begins with a grappling position. Therefore, the length of the top, outer sleeves, mouth of the sleeves, belt, length of the hakama (pants), etc. were decided in detail. It is design so be able to grab easier. For ex ample, the belt is use in a throwing technique, and is also wrapped around the wrist for katame waza.

If Judo had different wear, I believe those techniques would have been completely different. In Karate, being topless does not have any adverse effects on technique. The bottoms may be necessary, but the tops are not used. The bottoms are best as Han Hakama (short pants).

In Karate, the main purpose of wearing the top is to keep sweat from flying all over during training or competition. A shortcoming to wearing a top is that it slows the movement of strikes and blocks. It especially becomes a hindrance when using the “ukeharai” (block). training the use of both arms. the feeling at the moment of the “uke” or to evade a bIow, etc. For those who prefer to wear a top, a haIf-sleeve top (above the elbows) is most suited. Karate wear of pre-World War II were all half-sleeves. Some may feel that being bare-chested is rude to others. But I ask you how about the Japanese national games such as Sumo, or wrestling and boxing of other countries? I believe that muscles developed through karate training should be shown. Developed muscles of Sumo, wrestling, boxing. weight lifting, etc. have attracted many and have resulted in its spread and development. Recently, some have extended the sleeves of the Karate tops down to the wrist.

They punch through the air making snapping sounds are ecstatic with themselves. The pure white of the native Karate wear is to maintain cleanliness. Recently among foreign practioners, the black Karate wear has become fashionable. This is not all admirable. This will eventually leads to filthiness.

By wearing short pants and training bare-chested, the movements become better and the skin gets stronger. It is also more economical, easier to carry and easier to wash.

During major Judo competitions, the matches are halted because the belts come untied or the wear becomes disarranged. There is already talk of improving the Judo wear. For Karate, after sufficient probing, there is a need to have Karate wear that is unique to Karate.