One aspect of Karate training is kumite (sparring). It allows one to use the skills learned in the kata and apply them directly to an opponent using defensive and offensive techniques. Kumite has yakusoku-kumite (promised sparring), jiyu-kumite (free sparring), kumite with protectors. etc. Today. the all Japan High School Tournaments use protectors. The universities and general public use “sundome” type tournaments. The above does not allow the use of certain body parts that makes karate unique. Instead, it only uses punches and kicks in a “sundome” match. This has taken away from the very importance of sports where competitors should be allowed to use all of one’ s power in attacking. The competitor attacks in a continuous manner yet trying not to touch the opponent. The whole thing is quite unnatural. The main athletes themselves cannot make the distinction of a win/loss, nor can a video camera film the attack because of its speed. The judges are left to their impressions when making their judgments. Even if a fast punch or kick is executed, it still leaves a serious question as to whether that attack had any power or not. 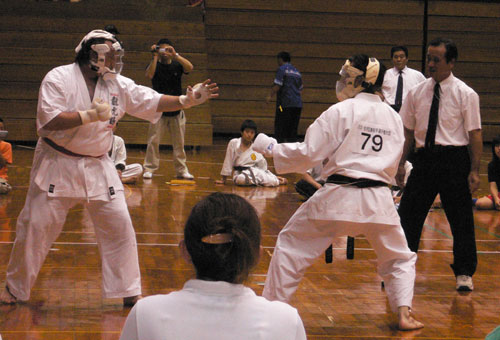 Rules affect technique in a big way. As the rules change, the techniques will al so change. And with sport being the main emphasis, it becomes a matter of who will win and who will lose. A good example of this can be seen the Japanese Budo of Judo, which has spread and developed throughout the world. Today, it is one of the Olympic sports where the young of the world try to develop those techniques. But the methods of judging have changed to “ippon”, “wazaari”, “yuuko” etc., into a more detailed point system. In order to win, it is found advantageous to attempt the safer wazaari, rather than go for the more dangerous ippon. As a result, the daily training for the natural and distinguished ippon techniques are researched less. The judo of nowadays is not decisive and the training shows no interest in making it so. All wish to have competition where the decision are decisive. Even when protectors are worn, a strong strike to the face may result in injury to the neck bone and is still dangerous. It also has the disadvantage of not being able fully utilize the hands. Competition allows one to experience what cannot be experienced in kata or yakusoku-kumite. The fight mentality or the quick taisabaki (shifting of the body angles), the distancing, training the eyes, and other that are obviously important to experience. 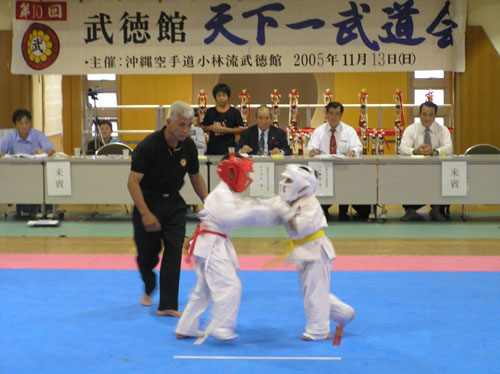 One must make consideration for budo that is appropriate for competition and those that are not. Reflect upon the basics, the establishment of true karate where all of one’ s energy is poured into it. Sports budo can be achieved in a short period of time, but in the same respect the skills are short lived. Budo-like karate is grounded in the basics, kata, etc., which requires long, continuous training to achieve. And the skills can be used for a long time to come. Today, the techniques of karate are taken lightly, and most turn to sports karate where the training span and life span is short.
The importance of the long training is for the unity of heart and technique, which must be realized. Sports karate as a means of expanding or promoting karate is questionable. The men of old have stated that making budo into a sport will ruin it. The budo mentality is a harsh battle with self. We have to realize that we are daily in battle with the complex environment that surrounds us. To win in competition, or getting a dan, or “strength”, “weakness”, “skill”, “clumsy” etc. is only the surface of karate. The value of budo is much greater. It is more important to cultivate the indomitable spirit through long training. Emphasis must be place on one’ s internal qualities. To love and be loved, to always have bright heart is very important as human beings. “Tradition” is a strength possessed that cannot be seen with the eyes but something that is a part of our lives. “Antiquity is to be held with old days, and know the new” is an old proverb that should be driven into our self and continuously trained for a long time. The uniqueness about karate is that it does not regard place, gender, and strength of body. I want to make a point that the training thereof can be done for long time. Presently in Okinawa, there are many karate practitioners that guard the ancient traditional karate culture. They have no interest in the Japanized sports karate.