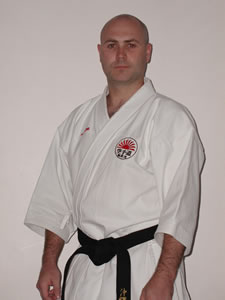 Let me write several notes about my history:
My name is Jaromír Musil and I was born in August 6th, 1973 in Brno. Firstly I met karate in 1986 at local karate club Brno where I started to train under leadership Mr. Vladimír Krčma. It was karate style Shotokan. In the club I trained to 1989 and I got 1.KYU karate Shotokan.

In 1989 I had to give over to train karate because of my health problems (in pursuance of my problems with breathing the doctors found out that I am an asthmatic). However my enthusiasm for karate was too strong so I decided to train at home myself. In 1990 I met Mr. František Varga who was setting up a new karate club Goju ryu. This style relished with me because of using hard and soft karate technique. I started to train a Goju ryu – a new karate style for me. Mr. Varga became my trainer and I helped him to keep the club.

In 1992 I firstly met Mr. TAKEJI OGAWA 8.Dan karate Goju Kai. In 1994 I hitted on an idea to spread karate into Brno surrounding and I established a new karate club in Hustopeče u Brna – L. F. Club Karate-Do (NIDOSHINKAN DOJO), where I am the main trainer. In 1995 I met Mr.Takeji Ogawa again and from this time we have met each other 2-3 times a year. It is usually at a karate seminar. In 1997, during my trip to Okinawa, Mr. Ogawa showed me Okinawa karate where he started train (Kokusai Goju ryu karate and kobudo Federation). In 1998 I became to the Chairman of sport-technical committee of the Czech Karate Goju ryu Federation. In July 1999 I participated in the Karate seminar IOGKF in Belgium under leadership of Mr. Morio Higaonna. I was glared by this training and it motivated me to train karate Goju ryu directly in birth place of Karate. After long correspondence with the Japanese embassy in the Czech Republic and after it with Japanese Karate Federation I got the contact to Mr. Seiro Aragaki from Ryushinkan Dojo in Yoyogi – Tokyo. The response came almost immediately and in September 1999 I flew off to train Karate Do to Tokyo to Mr. Seiro Aragaki. During one month I learned all about „okinawa karate Goju ryu – JUNDOKAN“ at Ryushinkan dojo. This training gave me a lot at and I am grateful to Mr. Aragaki for all. Everything I learned at Ryushinkan dojo I nace been training and training to pan over on my students. In 2001 I was appointed the Chairman of training-methodical committee of the Czech Karate Goju ryu Federation. In 2001 I was rank 3rd Dan Karate Goju Ryu. In 2003 I met and co-operation with Mr. Andrea Guarelli JUNDOKAN ITALIA. In May 2003 I met Mr. KINJO Seikichi 9th Dan JUNDOKAN HONBU and Mr. KIKUGAWA Masanari 8th Dan JUNDOKAN HONBU. In 2005 I was rank 4th Dan Karate Goju Ryu and in May 2005 I met and co-operation with Mr. KIKUGAWA Masanari 9th Dan O.G.K.K. and Mr. YOGI Jissho 6th Dan O.G.K.K. on the seminar in Italia.

In May 2006 I was participate seminar O.G.K.K. in Italia, Bussolengo with Mr. KIKUGAWA Masanari 9th Dan, Technical Director O.G.K.K. and Mr. MASUDA Norihiko 6th Dan, O.G.K.K. Secretary of Overseas committee. And In August 2006 I and members Nidoshinkan Dojo was participate to Technical seminar O.G.K.K. in Okinawa, Japan. Before seminar we was tree weeks practise karate gojuryu in Kikugawa Dojo, Yonabaru – Okinawa, Japan.